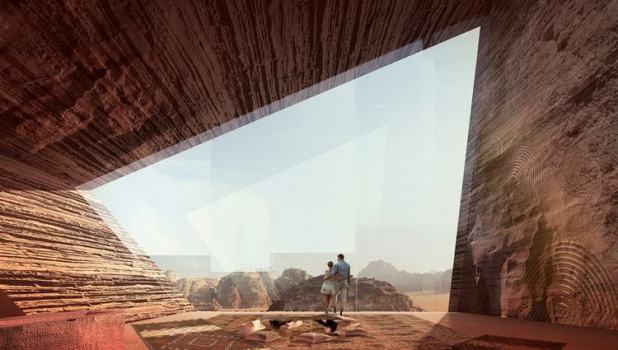 Oppenheim architecture + design Florida-based firm, is the designer for a new Desert Lodge in Wadi Rum, Jordan. The project seeks to establish a new benchmark for design, quality and sustainability in the natural environment.

Emerging from the landscape like an uncovered stone, the luxury accommodations are revealed in geometric cut-outs from the topography. The architecture is inserted into the natural faults and fissures of the land, resulting in simple and elemental forms that aim to enhance and embrace the site.

As a living space, the project seeks to provide a direct connection between man and nature by leaving many elements of the design raw and honest to its surrounding. Accommodating a rock lodge, spa lodge, tent lodge and reserve villa.

The awareness about sustainability has spread so far and wide that even affluent travelers opting for luxury travel want to make it as sustainable as possible. The hospitality industry has also responded wholeheartedly and the latest example is the eco lodge designed by Chad Oppenheim in Jordan’s desert. The desert lodge must be seen to be believed. It is almost unimaginable how beautiful and breathtaking a design can be if it merges with its environment seamlessly. The project is called the Valley of the Moon, or Wadi Rum in the local language and it resembles a Martian landscape with its high red sandstone and granite walls.

The first of its kind design that merges beautifully with the surrounding desert has authentic Bedouin roots. It were the Bedouins who used to roam the deserts and knew how to survive in the harsh environment. The inflow of large number of tourists because of adventure tours makes it difficult to maintain the Bedouin flavor of the location but this award-winning design manages the impossible. The best part is that they do it without compromising on the luxury service that the affluent travelers can’t do without. Today a desert lodge also must have all the amenities that have become a necessity for a luxury establishment.

The beauty of this design is that it has been made as sustainable as possible. The design not only takes into account the local environment but the local culture as well. It is very discreet and does not seem too conspicuous or interfering. The desert lodge depends on the natural thermal mass, obviating the need for artificial cooling or heating. The design incorporates facilities for water conservation and harvesting so that the lodge can manage with the local resources available. The unique project is scheduled to be completed in 2014.

Contemporary architecture in the Middle East has had its ups and downs. Most of the signature works by familiar names have tended to be situated in the region’s exploding conurbations, in the form of big towers, multi-starred hotels and exotic resorts, set down as markers for cultural and economic success. But outside the big cities it is a very different story.
Desert Lodge in Jordan has been Designed to be Sustainable

Wadi Rum, or the Valley of the Moon, is one of Jordan’s most famous destinations, a sand-swept landscape of pristine beauty, inhabited largely by Bedouins and a steady influx of tourists. The five star camp-outs ‘under the stars’ are a typical offer, mixing luxury travel with tribal customs. Chad Oppenheim’s competition-winning plan for a new Desert Lodge scheme takes this ersatz upscale canvas and blends it with minimalism, drama and, perhaps most importantly, sustainability.
The Miami-based architect has notched a series of retreats into a rock-face, paring back structure and enclosure to the bare minimum in order to reinforce the sense of place. Imagine a John Lautner embedded into a mountain, enhanced by pure concrete forms and sheets of glass and water.

By using so much natural thermal mass, the architect hopes to keep artificial heating and cooling to a minimum, integrating elements like water conservation and harvesting into the design. In development by a private client, Desert Lodges is, according to the architect, very much all systems go. If the reality matches the careful precision of these renders, Wadi Rum will soon be known for more than mere landscape.