Notice: Only variables should be passed by reference in /var/www/vhosts/trendsurvivor.com/httpdocs/wp-content/themes/thevoux-wp/admin/ot-loader.php on line 326
 Top Seven Celebrities with Style- Best Dressed- Number 1- Kate Moss - TrendSurvivor
IT HANDBAGS, NEWS, SHOES
2011/09/05 by Nina Papaioannou

My undisputed queen of fashion for over 20 years and definitely, one of the top trendsetters! Kate Moss is the ultimate super model turned style icon that has been setting trends for more than two decades. Kate Moss has the magic fashion formula, she undeniably knows clothes, and over the years has developed her own signature style. Enjoy her celebrity style secrets…. 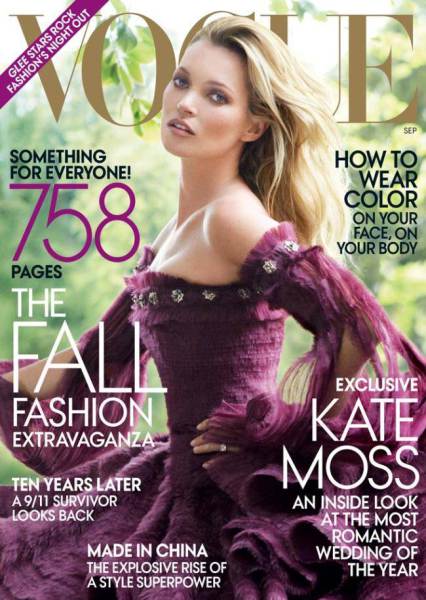 She may be the ultimate rule-breaker, but when it comes to her choices they are usually rock-chic.

She is named Best Dressed Woman of the Decade by Vogue magazine and is the face of many brands including jewelry designer David Yurman and Longchamp. She has invented many desirable looks. She only wears the best quality original clothing and loves vintage.

Contrary to Victoria Beckham, Kate Moss never looks like she’s trying too hard which makes he looks cool, and fun, and young, and sexy. How she does it? Well, the final touch is that everything is not perfect?! Sometimes the hair is not brushed or the make-up is a little messy.

She won the prestigious Vogue/CFDA award from the Fashion Designers of America in July 2005 as Fashion Inspiration. The haute couture dress she wore to the award ceremony was from the Christian Dior autumn 2005 haute couture designed by John Galliano.

Hippie, punk, glam rock, 1960s ingenue, 1920s starlet, Kate Moss flits effortlessly between personae without ever looking like she is wearing a fancy dress. As Moss herself says “clothes go in and out of fashion, but that’s not style. Style has to be classic.” I admire her style because she breaks the conventional style rules and sets off new trends worldwide!

She has been featured in fashion spreads in most major fashion magazines including UK, US, and French Vogue magazines (as well as other international versions of Vogue), Another Man, Vanity Fair, the Face, and W. Moss has appeared on the cover of British Vogue alone 26 times.

According to Forbes, Moss was earning more money than before her cocaine scandal: her 2004–2005 earnings were $5 million and her 2005–2006 earnings were $8 million. In 2007, with estimated earnings of $9 million, she was the second highest paid model in the world, behind Gisele Bündchen.

Kate Moss is no fool (apart from that whole Pete Doherty thing), she’s protecting her 48 million fortune by making Jamie Hince sign a pre-nup. Hopefully he’ll still get an allowance though.

She has got the allure …

The Freud painting certainly portrays an unfamiliar image of the supermodel. She is, as Freud often prefers with his subjects, completely naked. Her waif-like figure has been plumped up by pregnancy to almost Rubenesque rotundity (Freud tackled her midriff first so as to fix its form before it expanded further). She is seen, reclining on a bed, in steep recession so that her shins are the most prominent feature of her anatomy (which seldom happens in fashion shots).

Today an original print of a nude shot of her taken in her early days of modelling – and said to be one of her personal favourites – sold for $25,000 at auction. The 57in by 45in black and white image was taken in Marrakech, Morocco, by fashion photographer Albert Watson on a shoot for the German edition of Vogue in January 1993.

I hope you agree …Kate Moss is on the Top Trendsurvivor!!! Have nice day!