Notice: Only variables should be passed by reference in /var/www/vhosts/trendsurvivor.com/httpdocs/wp-content/themes/thevoux-wp/admin/ot-loader.php on line 326
 London- Karl Lagerfeld and Net-a-Porter in Covent Garden... I was there too:) - TrendSurvivor
London
2012/01/27 by Nina Papaioannou

What a magnificent mega new age marketing strategy!!! A Clothing Line Launch with Pop-Up Windows opening simultaneously in five major cities and online??!!! Attending the London Karl Lagerfeld KARL for Net-a-Porter launch event, was no doubt a  futuristic experience! Just opposite the impressive Apple store in Covent Garden was a virtual shop with three windows decorated with pictures of the collection.

The German fashion designer and creative director of Chanel Karl Lagerfeld launched his new affordable line “The Karl Collection” exclusively on luxury retail brand Net-a-Porter. The starting figure is just £50 and though the 70 piece KARL range goes up to £360 including biker jackets, pleated skirts, blinging metallic shirts and leather collars.

The collection, launched yesterday on January 25, 2012, featured in five international pop-up store windows by Net-a-Porter in London, Paris, New York, Berlin and Sydney. Karl collection launch in Covent Garden is the one I attended and Daniel a personal shopper at Net-a-Porter gave me his ipad, so I could focus the camera on the window, try to purchase an item and get a chance to win it. Grr I didn’t win but a girl next to me did ! “Hold that feeling”  the photographer was instructing her so he could get his picture for the Net-a-Porter magazine! 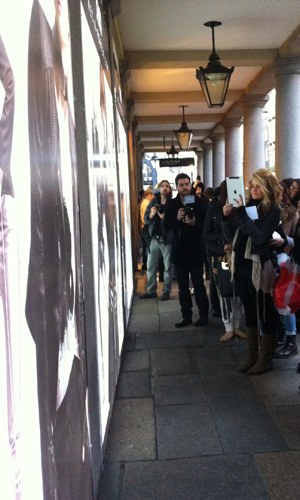 To celebrate the launch of KARL, online stockist Net-A-Porter had a gift for the first 50 shoppers and a chance to win pieces from the collection, as well as a £1,000 shopping spree on its virtual boutique.

After months of anticipation, Karl Lagerfeld’s collection has just landed on NET-A-PORTER  and many items are sold out.

And what makes this collaboration so distinctive in comparison to those we’ve seen previously? ‘This is a fashion first in terms of the buzz we’ve generated to launch it, it reaches 170 countries, and 3.5million visitors have access to the collection at the same time.’

The collection consists of 70 pieces of classic Karl pieces, from draped jersey dresses to monochrome T-shirts and leather jackets, all with that signature rock ‘n’ roll edge between Isabel Marant and Haider Ackermann … Even though anything designed by Karl is going to set the trend my favorite items are the following:

Loved the experience… that is futuristic marketing!!! Well, Karl and Net-a-Porter are a step ahead …again…

Have a lovely day!