Notice: Only variables should be passed by reference in /var/www/vhosts/trendsurvivor.com/httpdocs/wp-content/themes/thevoux-wp/admin/ot-loader.php on line 326
 Hit Refresh- 3 Best Hair Styles For Fall - TrendSurvivor
TRENDY HAIRSTYLES
2012/09/27 by Nina Papaioannou 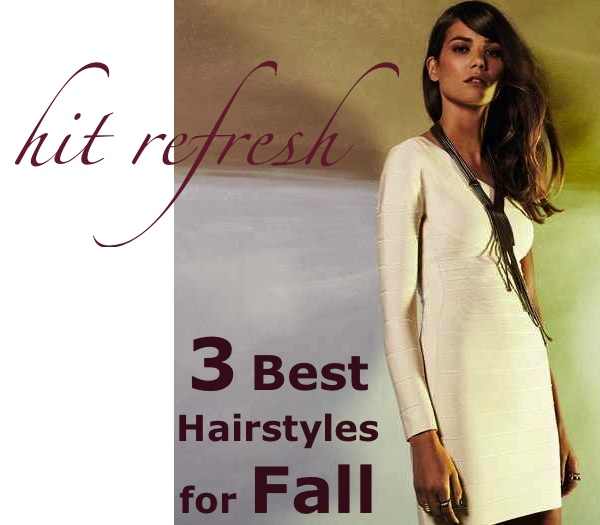 Hit refresh on your hairstyle! Create easily one of the 3 best hair styles for fall. From celebrity looks at the Emmy awards to street style at the New York Fashion Week and to the Spring 2013 catwalk 3 hair ideas prevailed. Fashion’s two biggest influences this year are the 60′s and the 90′s, from the ubiquitous braid to sleek, deep side parts there is something for every length, color, and texture. Love every version of the three main fashionable hair style trends and I did try a combination of the three in New York.

A sexy, undone, and sophisticated look for fall. The new low pony tail has an understated elegant style. It is easy to create after the hair is straightened by pulling it into a low ponytail at the nape of the neck. The inspiration for an easy, low pony came from two functional places: the desire to highlight both the sporty separates as seen at Michael Kors and Alexander Wang, as well as the embellished, Eastern-inspired outfits seen at shows such as Reem Acra. I tried this trendy hair do already at ifb con, I had my hair done in Athens was still looking fine after an 11 hour flight and a good night sleep.

Braids were this summer staple and will still be going strong right into fall. The 60’s references popped up everywhere, in New York Fashion Week, including in the hair! The 60’s become a point of inspiration as opposed to a trend. From soft, Malibu Barbie braids to tight, random ones worthy of a hippie, the braid’s new executions made the tried-and-true style feel modern. I love braids every season! Adored the side-swept braids at Custo Barcelona, were it is tucked under models’ ears for an interesting take on faux fringe.

The dramatic side part was inspired by a simple, chic and sophisticated style reminiscent of the 90’s popular androgynous look. Hair is clean, pin straight, and either framed the face naturally or was pulled back into low chignons and ponytails. A low side part instantly adds sophistication and drama. At the Gianfranco Ferré show, hair guru, Guido used the technique to punctuate the ’60s-inspired ponytails. After applying a blow-drying lotion to the hair, he blew it dry with a boar-bristle brush, blasting the roots with extra hot air for additional height. He created a deep side part so the hair fell softly over the forehead and slightly over one brow, then gathered the hair loosely at the nape of the neck and secured it in place.
Which hair style do you prefer?