Notice: Only variables should be passed by reference in /var/www/vhosts/trendsurvivor.com/httpdocs/wp-content/themes/thevoux-wp/admin/ot-loader.php on line 326
 DAVID HOCKNEY : COLOR LOVE... A BIGGER PICTURE - TrendSurvivor
ART, TRAVEL DIARY
2012/04/28 by Nina Papaioannou

I was so lucky to be in London when David Hockney displayed a full-scale exclusive exhibition at the London’s Royal Academy of Arts in January 2012 which featured  150 spectacular landscape works. Looking at the pictures I remembered how impressive these huge bright colored landscapes where and how they made me feel warm in the middle of winter.

In addition to multi paneled Crayola-like oils, the indefatigable artist had produced supersize prints from 51 iPad drawings and a film about the changing seasons near his home, shot using nine cameras attached to a rig on a Jeep. “Everything feeds into everything else,” says Devaney of Hockney’s masterly synthesis of new technologies.

The “one man show” which run from Jan-April, 2012 was dedicated to a single genre by the artists – landscapes – and comprises the use of high-tech tools, multi cameras and low-tech media-like paintings.

When David Hockney, English painter-photographer, decided in 2005,  to spend most of his time in the English countryside after nearly three decades in Los Angeles something happened.

David Hockney was best known for his 1960s-era paintings of sky-blue swimming pools, friends, lovers and Beverly Hills housewives but all that changed. He returned to his childhood town of Bridlington, perched seaside in northwest England, and found himself completely seduced by the lush greenery and expansive landscape he had known when he was younger.

The work he submitted to London’s Royal Academy of Arts  in 2007 showed a palette that had grown darker yet more vivid than that of his well-known L.A. paintings.

According to Bloomberg, the phrase “A Bigger Picture” can be interpreted in two different ways. One is that the larger the picture, the closer the viewer feels to it. The other implication of the phrase is that Hockney has used the medium of multiple cameras such that the viewer can see the picture from varying angles.

As you can see, I did sit with my Paul cappuccino, my laptop and my brochures the next day to write about David Hockney’s Royal Academy of Arts Exhibition but I got carried away with fashion and posted something else… 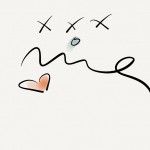